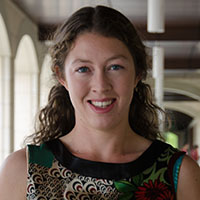 Modern technology relies on complex, nonlinear interactions between electrons and electromagnetic fields. Modeling these interactions is particularly challenging in vacuum electronic sources, the enabling technology in high power communications and particle accelerators, as approximations such as neglecting relativity, system boundaries or space charge are invalid. When applied to the next generation of designs, existing simulation codes take on the order of days to run, with results highly sensitive to the mesh and particle distribution.

My research focuses on new techniques to numerically model steady state beam-wave interactions efficiently and robustly, reducing simulation times by over two orders of magnitude from the current state of the art. By applying concepts from Lagrangian mechanics and classical field theory in the computation of the fields and particle trajectories we obtain an unprecedentedly complete treatment of the space charge and current density which drive the self-fields of the beam. Unlike conventional approaches using edge elements, the resulting nodal formulation is highly conducive to multi-physics problems where the solution is coupled to thermal or structural effects.

Moving beyond vacuum electronic sources, including additional interaction terms in the Lagrangian would render this approach suitable for the similar modeling challenges of semiconductor chip design. By solving for the electromagnetic four-potential instead of the fields this approach could also have intriguing applications in metamaterials and quantum devices to model physical phenomena which does not manifest in interactions with the fields, such as the Aharonov-Bohm effect.

Bio:
Alysson Gold is currently pursuing her PhD in Electrical Engineering at Stanford University in the modeling, design and testing of high power radio-frequency sources with Professor Tantawi. Her research interests are centered on the interaction of intense charged particle beams and electromagnetic fields. Recently, she has focused on numerical methods in electromagnetism and high performance scientific computing, including an internship at Nvidia Research. During her BASc in Engineering Physics at the University of British Columbia, Alysson developed a highly interdisciplinary background with expertise in areas from theoretical physics and applied mathematics to rapid prototyping and circuit design. She enjoys applying this background to research that balances theory, computation and hands-on experimental work. Alysson is the APS DPB Early-Career Representative, a Siemann Fellow and an NSERC Alexander Graham Bell Graduate Scholar. She has won multiple awards for her research, including Best Student Poster at the 2018 International Particle Accelerator Conference.