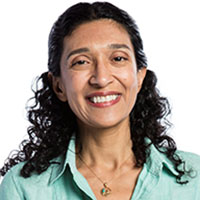 Azita Emami is the Andrew and Peggy Cherng Professor of Electrical Engineering and Medical Engineering at Caltech and a Heritage Medical Research Institute Investigator. She also serves as the Executive Officer (Department Head) for Electrical Engineering. She received her M.S. and Ph.D. degrees in Electrical Engineering from Stanford University in 1999 and 2004, respectively, and her B.S. degree from Sharif University of Technology in 1996. From 2004 to 2006, she was with IBM T. J. Watson Research Center before joining Caltech in 2007. Her current research interests include integrated circuits and systems, integrated photonics, optical interconnects, wearable and implantable devices for neural recording, neural stimulation, sensing and drug delivery. She is currently the associated editor for the IEEE Journal of Solid State Circuits (JSSC). She is also an IEEE SSCS distinguished lecturer.