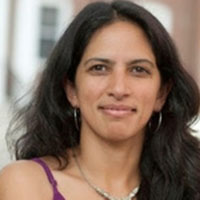 I am a Professor in Computer Science, at the Harvard School of Engineering and Applied Sciences. I am also a Core Faculty Member of the Harvard Wyss Institute for Biologically Inspired Engineering, where I co-lead the BioRobotics Platform. Before becoming faculty, I spent a year as a Research Fellow in the Department of Systems Biology at Harvard Medical School. I received my PhD and was a Postdoc Lecturer at the MIT Computer Science and Artificial Intelligence Laboratory (CSAIL), as a member of the Amorphous Computing Group, supported by the Bell Labs GRPW Fellowship. I am grateful to have received the Microsoft New Faculty Fellowship (2005), NSF Career Award (2007), Anita Borg Early Career Award (2010), Radcliffe Fellowship (2012), and to be named as one of the Nature 10: Top ten scientists and engineers of 2014 by the journal Nature (Dec 2014). I am co-founder and Scientific Advisor of an educational robotics company, ROOT Robotics (Aug 2017), and our lab’s Kilobots are available for purchase from K-Team Inc. You can find out more about my research from a TED talk that I recently gave at the annual TED conference in Vancouver in April 2017.

I am also the author of a Scientific American blog article on tenure-track life (7 year postdoc), the founding advisor for the Harvard Women-in-CS group (WICS), and a strong advocate for a nurturing and inclusive culture in science and for gender parity in academia. I am honored to have received the McDonald Mentoring Award, and to have a large network of mentees and peers who care about these same issues.