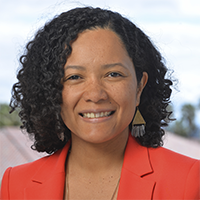 Debbie G. Senesky is an Assistant Professor at Stanford University in the Aeronautics and Astronautics Department and by courtesy, the Electrical Engineering Department. In addition, she is the Principal Investigator of the EXtreme Environment Microsystems Laboratory (XLab). Her research interests include the development of nanomaterials for extreme harsh environments, high-temperature electronics, and robust instrumentation for Venus exploration. In the past, she has held positions at GE Sensing (formerly known as NovaSensor), GE Global Research Center, and Hewlett Packard. She received the B.S. degree (2001) in mechanical engineering from the University of Southern California. She received the M.S. degree (2004) and Ph.D. degree (2007) in mechanical engineering from the University of California, Berkeley. Prof. Senesky recently chaired the 2018 Women in Aerospace Symposium (WIA2018) at Stanford University. She has served on the technical program committee of the IEEE International Electron Devices Meeting (IEEE IEDM), International Conference on Solid-State Sensors, Actuators, and Microsystems (Transducers), and International Symposium on Sensor Science (I3S). She is currently the co-editor of three technical journals: IEEE Electron Device Letters, Sensors, and Micromachines. In addition, she currently serves on the board of directors of the non-profit organization Scientific Adventures for Girls. In recognition of her research, she received the Emerging Leader Abie Award from AnitaB.org in 2018, Early Faculty Career Award from the National Aeronautics and Space Administration (NASA) in 2012, Gabilan Faculty Fellowship Award in 2012, and Sloan Ph.D. Fellowship from the Alfred P. Sloan Foundation in 2004.